This post provides an introduction to raising ducks, followed by a description with photographs of six duck breeds you might be interested in raising on your farm.

Runner ducks
Photo credit: Wikipedia
If you are considering adding ducks to your small farm you will be making a wise choice, as they will be pleasant companions and entertain you daily while providing pest control, manure for your soil, meat, eggs, down and feathers, and left-over grease that can be used for cooking. Granted, they do make “messes” with water and mud, depending upon your tolerance for that sort of thing. If your land has water, adding ducks would be a perfect fit. Ducks can be herded to bed in a simple night time shelter and they are more cold hardy than chickens.

When I was growing up, my grandmothers raised ducks on their farms and always gave us their “extra” ducklings in the spring. Besides enjoying their company, in my opinion, there is no better holiday meat than home raised free range Mallard duck. We didn’t have a pond, but set out a large water container for them to swim in. They loved using it and we loved to watch them use it. When our small flock circled the place by wing in the fall, we sadly knew that harvesting time was upon us.

Duck husbandry is important around the world, especially in Asia, where ducks are sometimes integrated into the rice paddy cycle. In the United States in 2007, according to the USDA, 31.3 million ducks were raised and the top three duck raising states were Indiana, California, and Pennsylvania. Americans on average only consumed about 1/3 pound of duck per person that year. In Canada, the duck industry totaled $58 million in 2006, part of the $5 billion pountry industry. Commercial duck producers use 17-20 pounds of feed to raise 6-7 pound ducklings in 7 weeks, whereas small farmers let them graze and gather their own food.

Ducks don’t scratch up vegetables, like chickens do and they are efficient egg producers, too. They lay their eggs by 8 AM and the eggs are larger, richer and fatter than chicken eggs. Certain duck breeds are well-suited for egg-laying such as the Khaki Campbell which lays well over 300 eggs per year.

“You don’t have a snail problem. You have a duck deficiency!” —Bill Mollison

If you want an optimal permaculture use for ducks, keep them fenced in your orchard, away from vegetables and where these omnivores eat weeds, insect pests and the odd fallen fruit.

All domestic duck breeds originate from the wild Mallard except for the Muscovy. If heritage breeds are your thing, then you will want to consider raising Aylesbury, Crested, Black East Indian, Buff Orpington, Welsh Harlequin, Silver Appleyard or Rouen ducks.

The following chart is from a 1989 Mother Earth News. It shows which of “the duck breeds your grandparents raised are still best for small farmsteads,” listing the unique and important characteristics of each duck type.

These next two charts compare the efficiency of meat and egg production according to various poultry types, including how much feed is required to produce a pound of meat, or eggs. As you can see, ducks are quite efficient for both purposes when compared to other poultry, but choosing the appropriate breed for your needs is important. (source: permies.com) 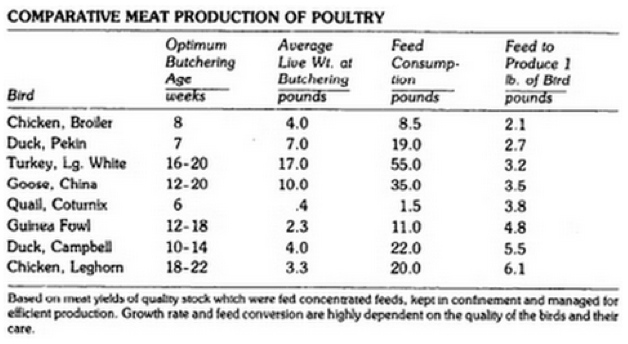 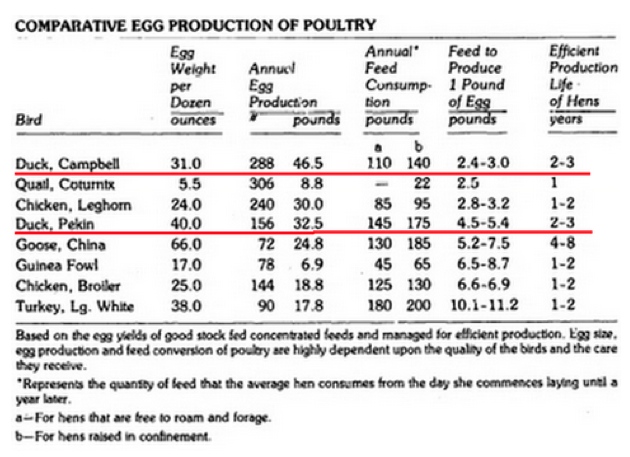 If you have a relative or neighbor who raises ducks, you just may find yourself with a brood of free give-a-ways when they discover they’ve hatched too many for the season.

Soon thereafter it will be you giving away the ducks.

Next, please read about the six duck breeds that I have chosen to feature. If you raise ducks and have any observations you’d like to share, please leave a comment and tell us which are your favorites. 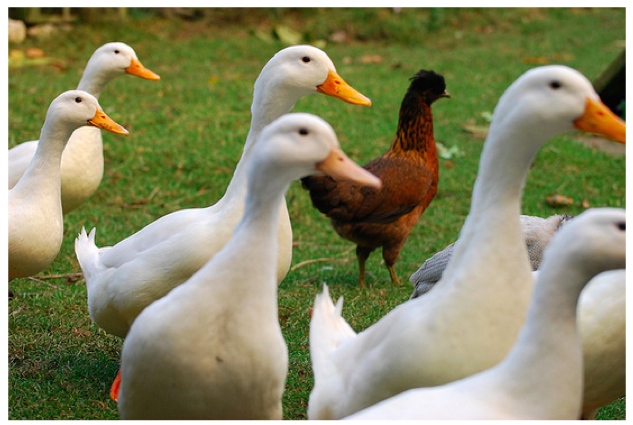 White Pekin Ducks
Photo credit: flickrCC/northdevonfarmer
The most common duck in the U.S. is the White Pekin, also called the Long Island Duck. Ninty-five percent of the duck meat consumed in the U.S. is Pekin, and it is the most popular commercial breed. Bred from the Mallard in China many years ago, this breed marked the beginning of America’s domestic duck industry in 1873, when they were shipped here from England.

The White Pekin is a dual-purpose breed, with adults weighing 8-11 pounds, and females laying 140-200 eggs per year. The body type is large with pure white feathers and an orange beak and feet. The breed is nervous, generally too heavy to fly, and considered the easiest of all breeds to dress. Their average lifespan is 9 to 12 years.

As with other ducks, these can imprint on humans for pleasant and long-lasting companionship. They are excellent sentinels, like geese, and will warn the household or other animals in the yard of approaching strangers or danger. 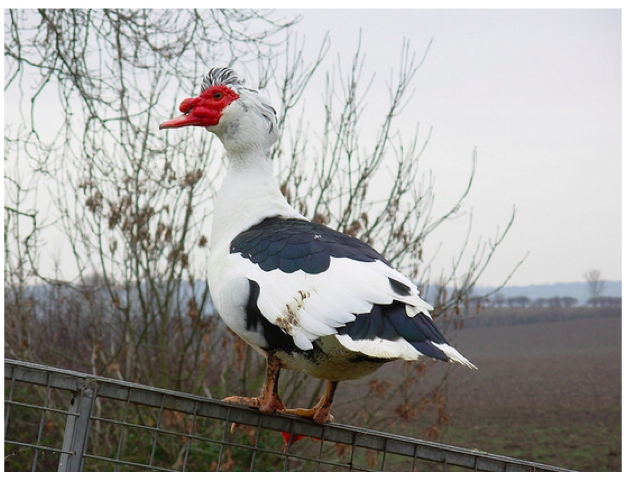 Muscovy duck perched on a farm fence
photo credit: flickr CC/SubZeroConsciousness
Originally from Brazil, the “quackless” Muscovy duck is considered by some to be more goose-like. They are the only breed of duck that is not descended from the Mallard. Muscovy Ducks had been domesticated by various Native American cultures in the Americas when Columbus arrived. The first few were brought to Europe by the European explorers in the 16th century. In their natural range of South America, they are often referred to as “Musco ducks” as they eat many mosquitos.

The Muscovy Duck is sometimes crossed with mallards in captivity to produce hybrids, known as mulard ducks (“mule duck”) because they are sterile.

This is a dual purpose breed, desireable for both meat and egg-laying. Muscovy meat is unique in that it is stronger tasting, tender, less greasy, leaner, and sometimes compared to veal or roast beef. White breeds are most desireable for meat production due to skin color. They grow quickly and were once the choice of meat for European Christmas dinners. They are hardy and less prone to illnesses than other duck breeds.

Adult Muscovys weigh 7-12 pounds or more and are 25-34 inches long. The males are twice the size of the females. A unique characteristic of this duck is that it can perch due to feet with strong sharp claws. This earned them names of “perching duck” and “tree sitting duck.” The mature males have large red warty caruncles above the beak and around the eyes. They are intelligent, agile, and come in a wide variety of colors, although most are still the original color of glossy blackish/brown and white. The male has a breathy voice, and the female, a quiet croaking call.

These are very good egg layers, hatching 15-20 eggs up to three times a year. They lay eggs in tree holes or nesting boxes and incubate them for 35 days. The young stay with their mothers for 10-12 weeks and can fly in 5-8 weeks. The young feed on grains, grass and insects, and are good at keeping lawns trimmed. They eat mosquitoes, mosquito larvae, roaches, flies, spiders, and ants.

Males can be aggressive and observed to fight using their claws, wings and beaks, however, they are overall quite friendly to people. Muscovys swim less than other ducks. They prefer wooded areas with water, adapt well to extreme cold, and like to roost in trees at night. This breed is spreading, adaptable to both tropics and cold. 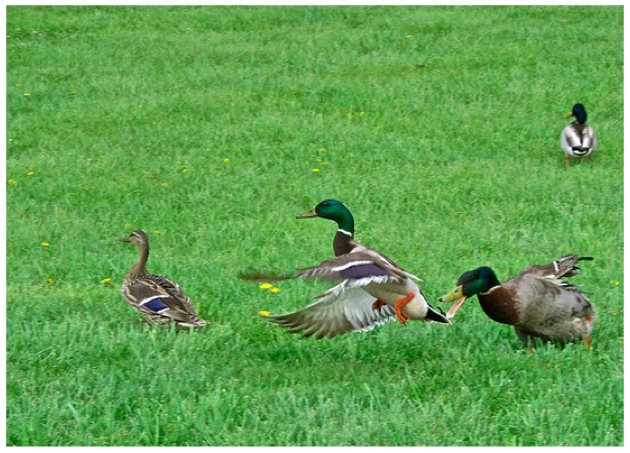 Mallard Ducks having a dispute
photo credit: flickr CC/ellenm1
The Mallard duck is the ancestor of most all domestic ducks except for the Muscovy and American Black duck. This “Wild Duck” domesticated weighs 3-3.5 pounds at adulthood and reaches 26 inches in length. The biggest threat to its breed is hybridization with other ducks.

This small flying duck which is widely hunted is native to most countries in the Northern Hemisphere. The male, with its characteristic green head and white neckring is easily recognized.

The mother Mallard raises one or two broods per year often in the same spot year after year, with 8-13 eggs per nest which are incubated 27 days. By five weeks of age, the ducklings are hardy and ready for any type of weather. The ducklings fledge at 50-60 days and between three to four months of age, the young begin flying. Mallards mature at 14 months and can live 20 years in captivity, though in the wild, half of them die by two years of age.

If you choose to raise mallards, know that this breed is timid and somewhat shy of humans. They are social, so need a small flock to feel content. Mallard meat is darker than other breeds. Their diet consists of small water plants and animals as well as grains, weeds, and insects. Noisy by nature, this is a quacking breed. Allow them to forage, swim, and fly and they will be happy. 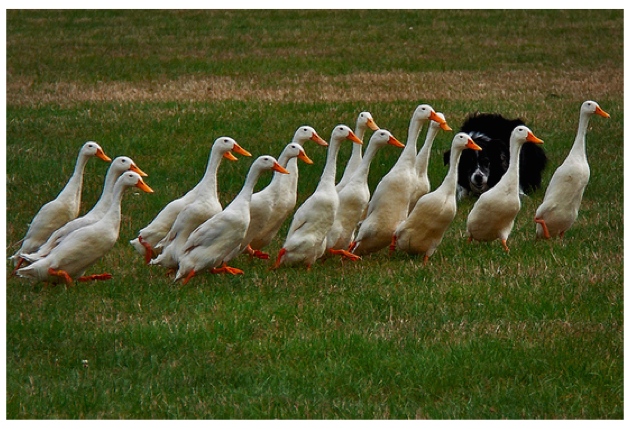 Runner ducks running instead of flying
Photo credit: FlickrCC/me’nthedogs
The Indian Runner duck is a “light duck,” egg-laying, nervous, general purpose breed which stands tall like a penguin. It is found in two dozen colors and does not fly, but runs instead. This breed originated in India or possibly China over 2,000 years ago and came to the United States from England in 1900.

These are prolific egg layers, laying anywhere from 150-300 eggs per year, depending upon the variety. The females rarely nest but drop eggs wherever they happen to be foraging. The adult drake weighs 3.5-5 pounds and the duck weighs 3-4.4 pounds with heights of 20-30 inches. This is a less noisy breed as only the females quack.

These ducks love to forage, swim, and run through grassy meadows, though they can be content confined to a garden area. 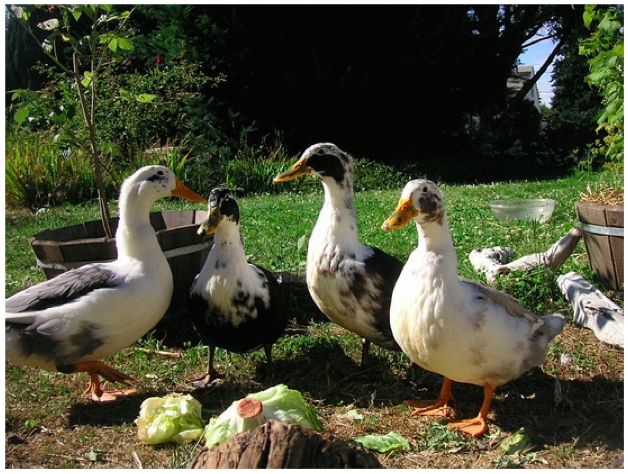 Ancona ducks
Photo credit: Wikipedia
This excellent choice for a domestic egg-laying and meat producing duck is a rare breed which was introduced into the U.S. in 1984 from England. Anconas descended from the Indian Runner Duck and the Belgian Huttegem Duck, and are most closely related to the Magpie duck. This breed has a calm personality, they are excellent foragers, and prolific egg layers, laying 210-280 eggs per year. With a quick growth rate, adults weigh 6-6.5 pounds, and the meat is tasty and less fatty than the Pekin. Attractive in appearance, the most common color of the Ancona duck is black and white, though they come in a wide range of colors and mottlings. 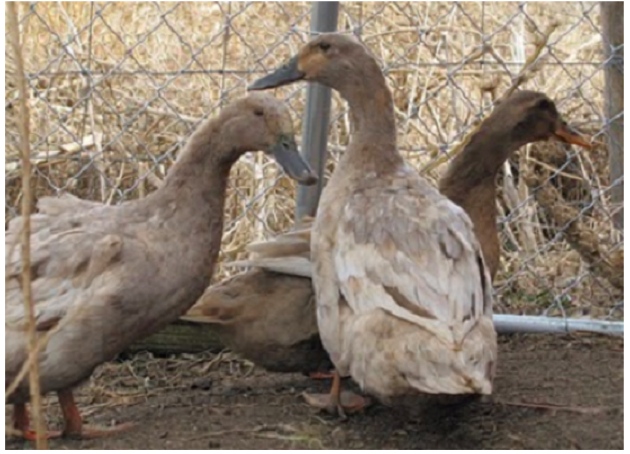 Buff Orpington Duck
Photo credit: Sprout ‘n Wings Farm
This large dual purpose breed is an especially attractive good egg layer and table duck. The buff color found in both the male and female was created by crossing Indian Runners with Rouens, Aylesburys and Cayugas in England. They were introduced to the United States in 1908 but is rare today.

Buffs are a flock bird that lays 150-220 eggs per year and grows quickly. Their meat is considered tastier than the larger Pekins, and ready for harvest after the ducks are 8-10 weeks old. Light pin feathers make this breed easier to dress. Adult Buffs weigh 7 to 8 pounds.

As an added bonus for this duck’s attractiveness, it does not show dirt.
Share
‹
›
Home
View web version