PNAS Study: Population Growth Will be Constrained by the Limits of Trading Virtual Water (Food) 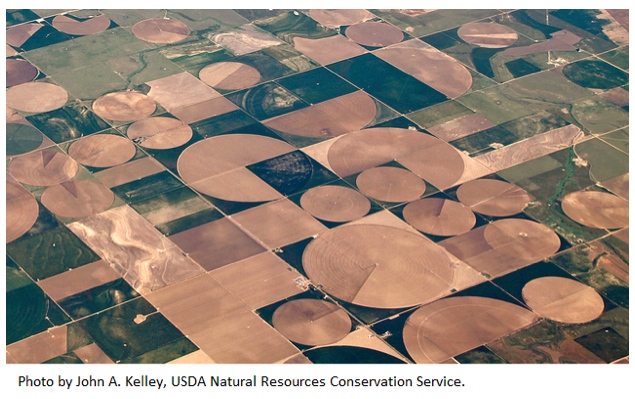 A new study has been released by the Proceedings of the National Academy of Sciences (PNAS), which calls into question the unsustainable global food export system based upon unsustainable export volumes of virtual water.

The first two sentences sums it up:

Population growth is in general constrained by food production, which in turn depends on the access to water resources. … Most of the water we use is to produce the food we eat. With the world’s population that has doubled every 40 years, there is a growing concern that water limitations will soon impede humanity to meet its food requirements.

The study refers to a global water unbalance and challenges the long-term sustainability of the food trade system as a whole, based upon current food export rates. It projects that growing demographic requirements of water-rich nations will result in less exports to water-poor regions.

Water-rich regions are likely to soon reduce the amount of virtual water they export, thus leaving import-dependent regions without enough water to sustain their populations.

The concern is that virtual water trade is allowing for some populations to exceed the limits imposed by their local water resources, and that by sustaining demographic growth above the regional carrying capacity, virtual water trade has mitigated the effects of drought and famine in many regions of the world. 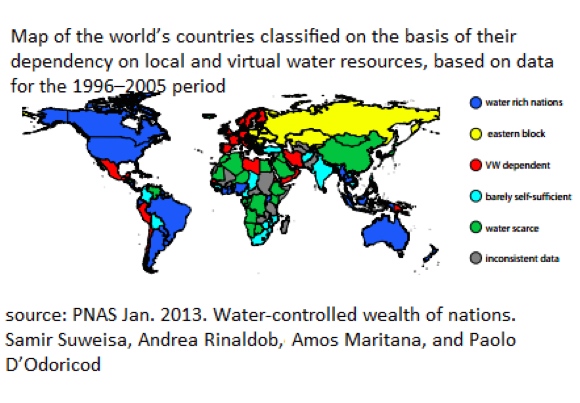 Using the estimate that the carrying capacity of one-third of all nations today depends upon food availability, and thus water availability, the study estimates maximum sustainable populations. Because both water-rich and trade-dependent populations are growing to rely on the same pool of resources, in the long run the virtual water exports are unsustainable.

One of the study’s scenarios takes into account plausible crop expansions, increases in agricultural production efficiency, and changes in diet and consumption rates.

These are huge variables, each one of them, making this a difficult assessment.

The study concludes that water will eventually limit population growth. This analysis estimates that the decline in the trade-dependent population is expected to start around 2030, but possibly not until 2040 to 2060 given the right amount of international cooperation. Interestingly, they compared their conclusion as coming out similarly to Heinz von Foerster’s Doomsday prediction for human population growth to cease expansion on November 13, 2026.

This is a hugely important subject, but one that is riddled with “what if” questions.

In my opinion, the greatest current threats to global food security are politics and policy of individual nations, economic conditions of individual nations, biofuels, and yes, water, energy, climate, and land constraints. On the subject of water, the energy-water nexus will compete for agricultural water, in addition to the growth of human populations. Policies can also create large water demands. Corn ethanol policy results in huge amounts of aquifer water use, for example. Another great challenge in the coming decades might be production costs, since industrial farming method costs seem to be increasing at an unsustainable pace. Were it not for today’s biofuels policies and generous government agricultural subsidies, today’s high input costs might not be recovered. Energy costs and availability are a key factor behind today’s food exports, or surpluses, and may dictate the farming methods of tomorrow, which in turn will determine food output amounts. Energy is required for irrigation and is embedded throughout today’s food system and food trade system. Furthermore, there is opportunity for more water conservation and innovation in today’s food production systems. As water becomes more expensive, that innovation will occur.

Agriculture requires many and varied inputs making modern food security a very complex issue. According the the World Bank, in 2007, only 15 percent of farm output in terms of embedded water is traded internationally and though I suspect that number is headed upwards, it would be difficult to predict a close-term limits to growth of human populations based upon water trade embedded in food, and much of today’s virtual water trade most likely involves livestock. So, today’s agricultural production, trade, and export volumes are not limited by water availability alone.

Today’s food security specialists are encouraging the goal of regional food security. This is the best security, and takes into account water availability and production methods. For it to happen, small shareholder farmers need markets which often can’t compete with “virtual water” food exports and they also need good, supportive governments.

Preserving the water that we have by using aquifers in a wise and limited way, and keeping our water uncontaminated, may be the biggest and most worthwhile water challenge of all. But unfortunately, like soil conservation, water is a natural resource too easily exploited.

Thankfully, there is a lot of resilience available in the food system, and today we continue to have a large amount of overproduction and waste, so I’m not certain that I agree with the doomsday dates of this study. If climate change results in less water from snow melt and more weather-related crop failures, however, agricultural growing regions will necessarily shift, which could change food producing regions significantly, even within the U.S.